German Chancellor Angela Merkel is the cheerleader for the globalist project to destroy the sovereignty of European nations and flood them with third-world Muslim invaders.

It has been widely assumed that Merkel is the leader of this push because she is a frigid feminist childless hag wishing for others to share in her immense misery, but there may be something even more sinister behind her plotting: Jew hatred.

The Jerusalem Post reports on how Merkel is continuing her anti-Israel voting record at the United Nations and German parliament is impotent to rebuke her:

“Political representatives in Germany’s Bundestag overwhelmingly rejected a resolution by the Free Democratic Party to urge Chancellor Angela Merkel’s government to reverse its anti-Israel voting record at the United Nations.

The Free Democratic Party (FDP) MPS Bijan Djir-Sarai and Frank Müller-Rosentritt introduced the pro-Israel resolution calling on the federal government “in the bodies and specialized agencies of the United Nations (such as the UN General Assembly, the UN Human Rights Council or UNESCO) to dissociate from unilateral, primarily politically motivated initiatives and alliances of anti-Israeli Member States, and protect Israel and legitimate Israeli interests from unilateral condemnation.”

The resolution, which was reviewed by The Jerusalem Post, said that Merkel’s administration should seek to change its voting pattern in this context.

Merkel, who said in Israel in 2008 that its security is “non-negotiable” for her administration, voted with authoritarian regimes, like the Islamic Republic of Iran, 16 times in 2018 to condemn the Jewish state. Germany’s UN Ambassador Christoph Heusgen and the country’s UN diplomats voted 16 times against Israel from a total of 21 anti-Israel resolutions in 2018. Germany abstained from four anti-Jewish state resolutions.

The vote in the Bundestag was from a total of 626 MPs participating. An eye-popping 408 voted to reject the pro-Israel resolution while 155 urged its acceptance. A total of 63 MPs abstained. The depth of anti-Israelism in the Bundestag sparked criticism from a tiny number of German politicians and journalists.”

The populist right-wing opposition party, Alternative for Germany (AfD), are angrier than anyone else with Merkel and the German parliament for not standing with the Jewish people.

“The difference between words and actions have never been so clear as in Germany’s politics towards Israel,” AfD representative Anton Friesen said during debate before receiving massive applause from his party faithful. He called out Merkel’s porous migration policies for permitting the “mass import of Islamic anti-Semites.”

AfD are maligned as anti-Semites by the fake news media of Germany, but in actuality, they are the only ones willing to stand for Israel. They are positioning themselves to take power once Merkel’s globalist project falls to complete ruin.

And the Jews of Europe should welcome the change. Only populist right-wing parties like AfD are willing to keep the third-world Islamic invaders out, who are happy to target Jews as well as Christians with terrorist violence as they colonize in the name of Mohammad. Leftist political parties, out of either weakness or complicity, will only roll over as the third-world barbarians rape and pillage their way to victory.

It is time for Jewish people throughout the world to wake up to this reality and support the Right for their survival! 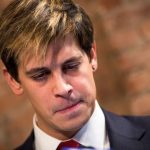