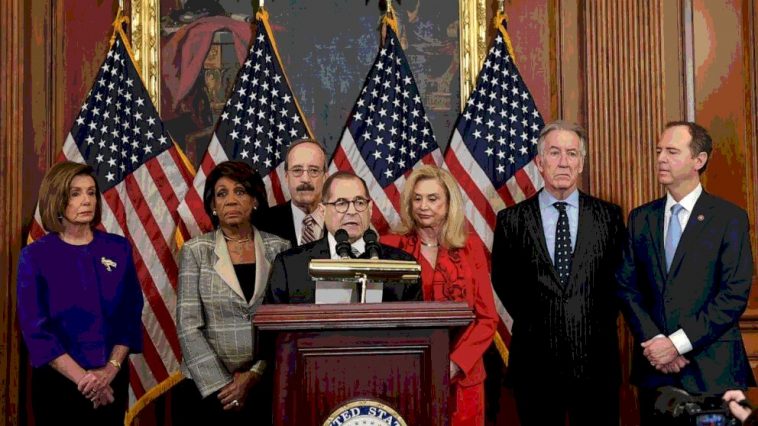 Prominent Democrats are threatening to expand the size of the Supreme Court to cancel out President Donald Trump’s court picks if Republicans vote on late Justice Ruth Bader Ginsburg’s replacement this year.

“If Sen. McConnell and @SenateGOP were to force through a nominee during the lame duck session—before a new Senate and President can take office—then the incoming Senate should immediately move to expand the Supreme Court,” House Judiciary Chairman Jerry Nadler wrote on Twitter Saturday.

“Filling the SCOTUS vacancy during a lame duck session, after the American people have voted for new leadership, is undemocratic and a clear violation of the public trust in elected officials,” added Nadler, a Democrat from New York.

“Congress would have to act and expanding the court would be the right place to start,” he said.

Senate Minority Leader Chuck Schumer told his fellow Senate Democrats on Saturday that “nothing is off the table for next year” if Republicans move to fill the vacant seat, CBS News reported.

Conservatives on Saturday pushed back on the idea of expanding and packing the Supreme Court.

Republican Tennessee Rep. Chuck Fleischmann warned that packing the court would be “dangerous” and undermine the court as an institution.

“Court packing is a dangerous and shortsighted idea that will delegitimize our institutions — and that’s what the Dems are threatening to do if they don’t get their way,” Fleischmann wrote in a tweet.

“Packing the court would be a greater blow to norms, legitimacy, and our system of government than anything Trump has said or done,” National Review editor Rich Lowry wrote on Twitter.

Some liberal voices in the media have expressed support for packing the court.

“So Democrats should threaten to pack the court,” left-wing writer Jill Filopovic argued in a Washington Post op-ed Saturday. “And, if McConnell pushes through a new justice and then Joe Biden wins, they should follow through,” she added.

“One way for Democrats to make clear they will not tolerate Republicans trying to fill this seat in advance of the election would be for them to pledge that, if they take the White House and Senate in November, they will increase the size of the Supreme Court to 13 justices,” University of California, Berkeley School of Law Dean Erwin Chemerinsky wrote in a Los Angeles Times op-ed Saturday.

“Democrats have no choice but to implement structural reforms to the judiciary if they hope to prevent decades of rule by the alt-right in America,” HuffPost reporter Zach Carter wrote in a June 2018 piece following Kennedy’s retirement.

“At a minimum, that will mean expanding the Supreme Court bench to 11 justices under the next Democratic president. Other reforms, including term limits to remove aging conservatives, may well be appropriate,” he added.

But Ginsburg herself rejected packing the court when asked about it last year.

“Nine seems to be a good number. It’s been that way for a long time,” she told NPR in July 2019. “I think it was a bad idea when President Franklin Roosevelt tried to pack the court.”