The first—the No War Against Iran Act, introduced by Rep. Ro Khanna (D-Calif.)—passed 228-175. All but three Democrats voted for it, while all but four Republicans voted against.

If enacted, it would block funds to the U.S. Department of Defense from being used to conduct unauthorized military operations on Iran.

“The last thing we can do is give the Pentagon another blank check,” Khanna told reporters on Wednesday. “The only time the Pentagon listens is where we exercise our power of the purse.”

The second measure, introduced by Rep. Barbara Lee (D-Calif.), would repeal the 2002 Authorization for Use of Military Force Against Iraq, which the Trump administration used as justification for carrying out the airstrike earlier this month that killed Iranian Maj. Gen. Qassem Soleimani.

The Lee amendment passed 236-166. All but 11 Republicans voted against it.

“We need to reassert our congressional authority,” said Lee in an interview with CBS News on Wednesday. “The repeal of it is long overdue.”

The measures are likely dead on arrival in the Republican-controlled Senate.

The White House has threatened to veto both acts, even though Trump tweeted on Wednesday that lawmakers should “vote their HEART!”

However, the president tweeted later on that day, “Nancy Pelosi wants Congress to take away authority Presidents use to stand up to other countries and defend AMERICANS. Stand with your Commander in Chiefs!” 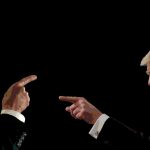