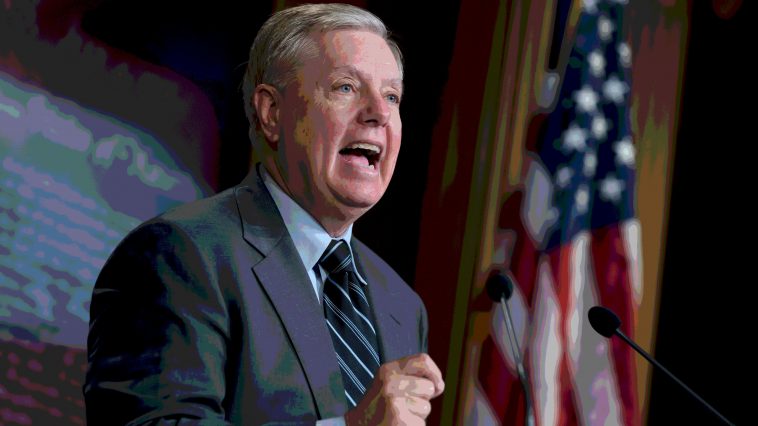 Sen. Lindsey Graham on Sunday teased the release of evidence showing that the FBI “lied their ass off” to Congress regarding the reliability of the Steele dossier, which the bureau used as part of its investigation of the Trump campaign.

“I will tell you next week what I found,” the South Carolina Republican said in an interview on “Fox Sunday Futures” with Maria Bartiromo.

“Here is what I think I’m going to be able to show to the public. Not only did the FBI lie to the court about the reliability about the Steele dossier, they also lied to the Congress. That’s a separate crime.”

Graham, the chairman of the Senate Judiciary Committee, released a declassified FBI memo on July 17 that further undercut the credibility of the dossier, which was written by former British spy Christopher Steele.

According to the memo, a Russia analyst named Igor Danchenko told the FBI in January 2017 that he was the primary source for Steele. Danchenko worked as a contractor for Steele and provided him information in 2016 regarding Donald Trump and members of his campaign.

Danchenko’s sources didn’t appear to have deep contacts inside the Kremlin, though they are portrayed that way in Steele’s dossier.

The Justice Department’s inspector general issued a report of the FBI’s handling of the dossier on Dec. 9. It faulted investigators for failing to disclose details of Danchenko’s interview with the FBI in applications for Foreign Intelligence Surveillance Act (FISA) warrants against former Trump aide Carter Page.

Graham noted that the FBI asserted that Danchenko seemed truthful in his interviews, but investigators failed to tell the FISA Court that information he shared undermined the dossier’s credibility.

“When the FBI understood that the dossier was no longer reliable they continued to use it,” Graham said.

He said it will be revealed next week that members of Congress requested an FBI briefing in 2018 after raising suspicions about the dossier and Steele’s source.

“We also now have found this, and this will come out next week, that Congress got suspicious about the Russian subsource and the reliability of the Steele dossier, and that members of Congress asked to be briefed about it,” Graham said.

Graham added that he has discovered notes that the FBI drafted ahead of a briefing in 2018.

“Stay tuned next week, you’re going to find that not only did the FBI lie to the FISA court, they lied their ass off to the Congress,” Graham said.