Iran’s Supreme Leader Ayatollah Ali Khamenei said on Sunday that the Americans will be pushed out of Iraq and Syria, and that U.S. actions in Afghanistan, Iraq and Syria led to it being hated worldwide, according to the transcript of a speech posted on his website.

“The Americans won’t stay in Iraq and Syria, and will be expelled,” said Khamenei, according to a Reuters report.

Tensions between the United States and Iran remain high, with U.S. President Donald Trump tweeting last month that he had instructed the U.S. Navy “to shoot down and destroy any and all Iranian gunboats if they harass our ships at sea.”

The development came a week after the U.S. military said that 11 vessels of Iran’s Islamic Revolutionary Guard Corps had conducted “dangerous and harassing approaches” to a fleet of U.S. ships in the northern Persian Gulf near Bahrain.

Meanwhile, Iran complained to the United Nations on Sunday and summoned the Swiss ambassador in Tehran, who represents American interests in the country, over possible new U.S. measures against Iranian fuel shipments to Venezuela, according to Reuters.

A senior administration official told Reuters last week that the United States was weighing whether to take action against Iranian fuel exports, as the oil sectors of both Iran and Venezuela are under sanctions. 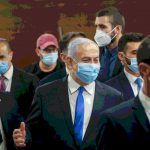